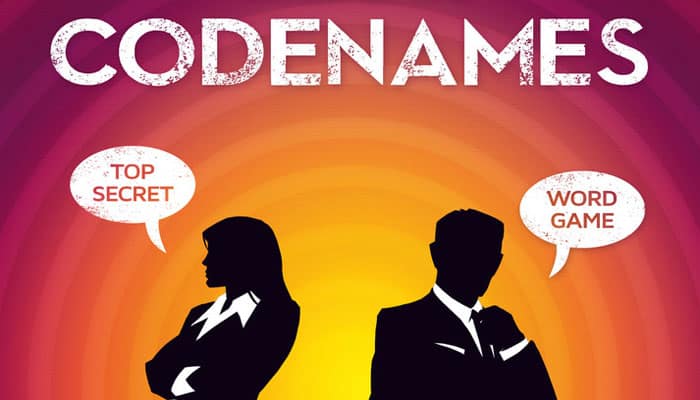 In this post, I’ll talk about how I built a clue generator for the game Codenames that provides a list of potential clues, numbers and associated target words, all with Tensorflow.

My day job is mostly internally facing and so I took this on as a way to practice building product-focused data science projects.

If you already know how the game works, feel free to skip or read again for a quick reminder.

Codenames is a card game with 2 teams. There are 25 cards laid out on the board, 9 belonging to one team, 8 belonging to another, 7 neutral and 1 double agent card.

Each time has a codemaster that can see which cards belong to which teams, and the remaining members of the teams are spies that only see a single word on each card.

The teams take turns having the codemaster provide a clue to their team made up of a single word and a number, with the clue relating to the number of cards on the board. The goal is to get the team to guess which words the clue is indicating, and they select cards to turn over.

If they select a card belonging to their team, they can continue guessing, but if they flip over a card that doesn’t, their turn is immediately ended and they could suffer the negative consequences of potentially flipping over the other team’s card, bringing them closer to their goal, or flipping over the double agent card and instantly losing the game.

Thus, the codemaster seeks to find clues that maximize the relationship to words on their team and minimize the relationship to words on the other team. Additionally, by finding clues with a larger number of cards it relates to, they can increase their chance of beating the other team by finishing first, but they risk having a lower relevance to each of the target cards and higher chance of accidentally missing a connection for opposing cards.

How I Built It

We represent a current board and team state with the following inputs:

What we are looking for is a list of potential clues the codemaster could use with the following fields:

As with most data science problems, the hardest part if quantifying exactly what you are looking to maximize or predict. In this case, we have a vague notion of maximize and minimizing relevance of our clue word to words on the board. While there are many ways to do this, the way I chose to frame it for now is in terms of embeddings.

Rather than generating my own, I used a pre-trained model from Tensorflow, the Wiki-words-500 text embedding that already generated a mapping from words to their vector representations. I now have a function to translate any given english word into a vector of length 500.

Please see the end for discussions about future improvements related to choosing a embedding corpus.

Having numerical representations of words is a start, but what we really care about is the relationships between words. We need to compare the vectors to begin to use them.

When comparing vectors, you will often hear the language of distance and similarity, which are two sides of the same coin, meaning difference and closeness of two vectors, respectively. For certain types of distances, we may just subtract the value from one to switch between the two.

For this case, I chose to work with cosine similarity, although I may look into other options in the future. This gives us a single number ranging from -1 to 1, with -1 indicating two words’ being as dissimilar as possible and 1 being equivalent.

In order to summarize clue quality in a single number, we consider the benefits and penalties associated with the outcome of guessing a card on the table. Obviously, we want to incentivize choosing clues that are relevant to our team and decentivize other cards, with increasing penalties for the undesirable outcomes. Neutral ends our turn, the opposing team’s card ends our turn and advances them to the goal, and the double agent loses the game.

The way we summarize this is by multiplying the cosine similarity for each card on the table by a set of coefficients that represent these benefits/penalties. The process is as folows:

This can all be accomplished very quickly with Tensorflow using their pre-trained embeddings and a series of matrix multiplications.

We do have an additional constraint to limit the number of words that the clue relates to, which changes how we think about the quality metric. The overall structure remains the same, but we need some way to determine which of our team’s cards to include in the clue.

The way I implemented it was to set a similarity threshold and only keep clues that have a similarity value equal to or greater than the threshold. This is the most straightforward way, and it ensures a global level of relevance. Of course, this introduces another parameter to tweak that we don’t have an exact way to measure the effectiveness of, and we do run the risk of excluding relevant clues that fall right below the cutoff. However, as problems go, having your team select another one of their cards is a decent one to have, although it may cause confusion later down the line.

The above process for calculating the quality metric remains the same as above, but, first we go through and remove all cards below the similarity threshold, and then calculate the contribution of the remaining ones towards our metric.

It’s clear that we want a positive coefficient for our cards and monotonically decreasing negative coefficients for opposing, neutral and double agent cards respectively, but it’s not obvious exactly what they should be for several reasons:

Number 4 above is the elephant in the room: How do we know our solution is effective?

The ideal method would be to test a bunch of games with randomly assigned teams, and provide the test teams with access to the clue recommendations. Our expectation is that the win rates would be equal between groups, and any significant difference would be driven by access to the tool. I would rather test giving tool access, but not mandating usage, because that’s a more realistic scenario in practice than forcing them to use the top recommendations every time. At this point, I don’t think we would consistently beat player intuition, so it’s not a valid comparison. However, the time required to get volunteers and acquire data seems impractical, so are there any other ways we can perform testing?

If you run a codenames online site with textual clue inputs, you could backtest and see how many times the clues recommended by users would have been recommended by the tool.There are multiple metrics used in recommender systems you could use to evaluate performance including NDCG or an adapted version of Mean Average Precision.

Regardless of what method you use, there are several problems:

A common way to generate datasets for bespoke targets is through Amazon Mechanical Turk , where you can get people to complete arbitrary tasks online for money. This often is used in ML to generate labels for unsupervised data such as images or natural language.

In this case, proper evaluation takes a fair amount of background understanding of the game just to be able to make evaluations, and for accurate evaluations, experience actually playing. Given the cost of getting random people to take time to learn a new game, confirm that their understanding is accurate, and then to actually play test games would be exorbitant, we need to modify our method into easier to consume subtasks that are proxies for clue quality.

I propose that we could potentially focus on getting people to evaluate clue similarity or dissimilarity to a set of words. This could be done either as choosing the most/least relevant clue to a set of words from a list of potential clues, or providing a clue and bank of words, and having them choose the most/least relevant words to the clue. This removes the need to evaluate multiple objectives simultaneously, and increases the amount of data we could collect per dollar. Evaluation would be between existing versions of the clue generator, or between existing game samplesa dn the clue generator.

Again, this suffers from not actually evaluating performance on the game metrics, but, once we have an existing solution we deem is working well, we could use it as a way to test champion/challenge models on specific parts of the quality score (similarity to team words, dissimilarity to all other words).

If not obvious by now, there are a lot of potential areas for improvement that I would like to pursue given time, but here are some of the main ones:

The current approach suffers from words with multiple meanings, the curse of dimensionality, a lack of concrete, objective measurements of similarity, and proper nouns in the word bank.

Switching to a knowledge graph, or even web-search PageRank like approach would help shore up the above problems and maybe be used in tandem with semantic similarity recommendations if not replacing it entirely.